The morning we berthed at Freeport, in the Bahamas represented my first venture onto a Caribbean island, and a chance to exercise my senses to different sights, a different sounds and different flavors.

All of which I got to do during lunch. Once again, I found myself getting accustomed to the combination of heat and humidity … so strange, at first, after spending so many years in West Texas. But I found myself re-adjusting quickly to the years I spent on America’s east coast and other parts of the world … and the constant breeze coming in off the ocean helped! 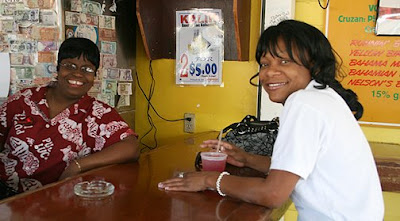 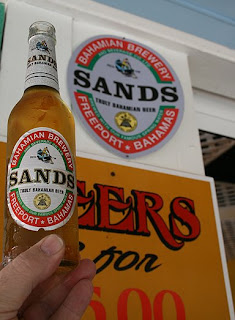 Also helping the heat was the application of liberal doses of cold beer, especially something locally-brewed, which I always try to do whenever I travel. Of all the material, earthly ties that bind people worldwide, and bring us together into a shared culture, one of my favorites is an appreciation for beer. Over lunch – which I went looking for while the family was shopping - it was Sands beer, brewed right here in Freeport, by the Bahamian Brewery & Beverage Company. Pretty good stuff … a golden beer, flavorful, but not strong … and a fine complement to a meal.
As it turned out, that was my meal. We were in an area that caters to tourists, cruise-shippers and spring-breakers, and the restaurants included a Subway, a Domino’s, standard U.S. fare, Italian, Greek … but nothing Bahamian, at least not during the lunch hour (there were some local fisherman with a fresh harvest of conch, getting it ready for dinner). 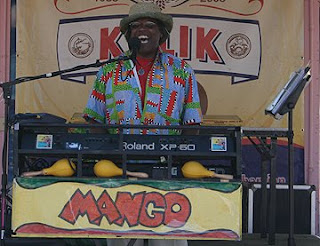 But while I didn’t have any food to go with my beer, I did have music, thanks to
Mango. He’s a one-man show on electric-keyboard-with-percussion-built-in, offering traditional fare such as “Island In the Sun” and “Day-O (The Banana Boat Song),” but also reggae variations of such songs at Cat Stevens’ “Wild World” and that tune from the credit report commercials.
Not a bad lunch, really, though I have to make sure to devote one meal – at least! – to conch, plaintains, etc. while I’m down here.

NOTE: These posts have been delayed a week, as I focused on enjoying the actual world … then writing about it in the virtual world.
Posted by Jeff at 12:05 PM

Glad you had a "NICE TIME ON GRAND BAHAMA ISLAND"....Please vist my web site.. www.mangoband.net
...Mango..

Great story and great Sands photo! Too bad you missed Caribbean Cafe, kitty corner from Rum Runners, Dive Inn Bar & Grill at UNEXSO, Billy Joe's next to the Sheraton, After Deck across from Zorbas, and Da Conch Man at the square. All have traditional Bahamian food - cracked conch, conch salad, fried chicken, bbq ribs, fried fish, peas n rice, macaroni, etc. Irie's at the Westin has more upscale Caribbean fare. Many of the other restaurants like Cafe Breeze, Zorbas, Le Med, etc have a lot of Bahamian fare as well, in addition to international selections.