History Off the Port Bow …

(Thanks to "an old salt" for helping me remember left from right ...)
You’d think someone who counted the Mercury 7 among his childhood heroes would’ve taken less than 45 years to get down to Florida and see a live launch in America’s space program.

But, such was the case with me. My father was posted to the south from time to time, but never that far south. So, I watched my heroes’ departures on television … wishing good luck and Godspeed to Alan Shepard, Gus Grissom and the rest … ESPECIALLY John Glenn (hey, I grew up in the company of Marines, after all).

Last Sunday evening, at long last, I made it to Florida … sorta … and I saw a live launch … sorta … in America’s space program … thanks to a series of fortuitous events that worked in my favor. One was the delayed departure of the space shuttle Discovery from America’s launch facility at Cape Canaveral. The other was the timely departure of our cruise ship from the seaport at Cape Canaveral, leaving us just a short distance away, and with a wonderful view of the brilliant flash of light on the northern horizon, the fire and smoke from the shuttle’s initial engines, then the jettisoning of said engines overhead, to the aft, off the port side of the ship, and watching the secondary engines kick-in. 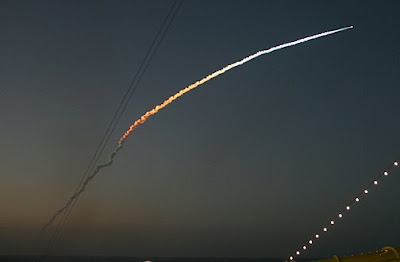 A wonderful sight … and no surprise that the hundreds of us who gathered aft – people of all shapes and sizes, ages and life experiences - shouted ourselves hoarse, cheering the sight.

It’s been said that the American space program has lost the luster it had in the 60s, as we first ventured into orbit, and in the 70s as we first ventured to the Moon … and that may be true in some respects … for myself, I can name each and every member of the Mercury 7 … but I can’t name a single member of our current shuttle crew. But good luck and Godspeed to each and every one of them, nonetheless!

NOTE: These posts have been delayed a week, as I focused on enjoying the actual world … then writing about it in the virtual world.
Posted by Jeff at 12:05 PM

Courtesy of my brother who was deupty dirctor of NASA, I've gotten to see several shuttle launches from the Banana River VIP viewing area......three miles from the launch tower. Probably the most amazing things I'm ever likely to see...

Wallace, I am envious in a MAJOR way. Seeing this launch as I did, I can only imagine what it must be like from that close.