Larry Knowles of AOL News isn't afraid to say it, and neither am I ... it is a true "pop" icon ... maybe even the greatest of all time. Happy Bubble Wrap Appreciation Day, everyone!

"For the past 10 years, fans from around the country have been setting aside time on the last Monday in January to twist and stomp, often in unison, as they commemorate what's known as Bubble Wrap Appreciation Day," Knowles write in this post on AOL News. "The day, known as BWAD, was begun in 2001 by a couple of bored radio DJs in Bloomington, Ind., supposedly looking to fill the news void between Martin Luther King Day and the Super Bowl. During that first BWAD, the radio station held a 'Bubblympiad' that included events such as a Bubble Wrap popping relay and Pop-a-Mole."

And so, without further ado ... are you ready to pop till you drop ... or at least until midnight? If you don't have aby actual bubble wrap close to had, here's some virtual bubble wrap for you ... time's a-wastin,' so get a-poppin.'
Posted by Jeff at 12:05 PM No comments:

The Devil's in the Details ...

Just about anyone who has been in the news business long enough will have a story - or two - of the one that got through ... an error that got through composition, proofing and re-proofing. I'm not talking about a simple typo such as a mis-spelt word or a fault in punctuation. Rather I'm talking about a factual error ... a representation something that just ain't so.

The latest example comes from one of our national television news broadcasters ... 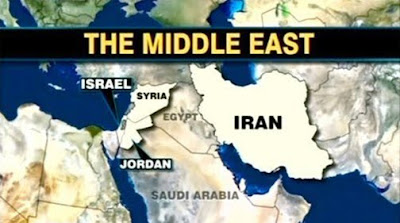 Apparently after 5,000-or-so years, Egypt has grown tired of the old neighborhood, and has moved. Really, though, I don't know if it was a move 'up' ... I mean sure, they no longer have Sudan as a next-door neighbor ... but now they have Iran!

I've deliberately deleted the bottom portion of this screen shot. Doesn't really matter who did it ... it happens to just about anybody at one time or another. And not just among your local news producers, either ... even the 'big boys' let one get through every now and then.

And it also happens to most news CONSUMERS, too. There are those who will latch on to mistakes such this as proof for their shrill denunciations of the mainstream media and its degradation. From my own experience, I suspect most of media's detractors would do far worse if they found themselves flying a journalist's desk for a while.

But, hey, it happens ... whether you're relocating Egypt, introducing Hoobert Heever, or announcing that Dewey has defeated Truman. What's more important is what you learn from it, and figure out how you might do things a little differently the next time.

On another Egypt note ... in the midst of the ongoing protests, please keep that troubled country and its people in your prayers.
Posted by Jeff at 12:55 PM 2 comments: 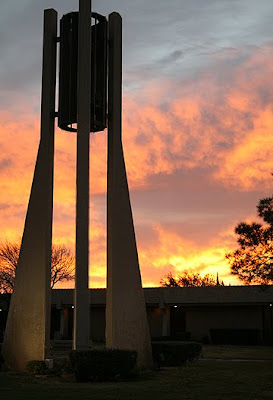 One of the benefits of coming to work early today, was getting a chance to get some shots of the skies as I walked across the Midland College campus to my office.
Posted by Jeff at 12:05 PM No comments:

"Conference Championship Sunday is over, which means we have 14 days without real football to survive (sorry, the Pro Bowl doesn’t count)," Gregg Rosenthall writes in this post on NBCSports.com

Rosenthall then goes on to suggest "nine storylines we’re already tired of just thinking about," as well as a couple he will probably never get enough of. One of the latter is Pittsbugh Steeler DE Brett Keisel's beard. "That thing is the seventh wonder of the world, and it would be hard to devote too much attention to it," he admits. "Two weeks of hype for Keisel’s beard wouldn’t be enough." 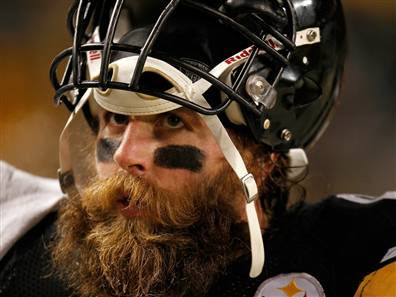 Probably more well-known nationwide - especially to television viewers and shampoo consumers - is another Pittsburgh defender and Mane Man, Troy Polamalu. Me? I prefer Keisel's brush ... those of you who have met me in the actual world would know why.
Posted by Jeff at 12:05 PM No comments:

Last month, I had a chance to drive up to Lubbock at mid-day. I've made the tip once or twice - or a zillion times! - before, and everything was pretty much as I had remembered it ...

... except for the rigs. There were A LOT of rigs on one side or the other of the road north, especially on the first-half of my drive, from Midland to Lamesa. I counted 19 along that stretch of road, and another one just on the north side of Lamesa.

And consider this, mine was a quick dashboard survey. Being the only one in the vehicle, I had to keep my eyes on the road at least half-the-time, so I probably missed some. There's also a stretch where a low ridge runs close and parallel to the highway for a number of miles ... not all that high really, but high enough to block any view of the countryside to the east.

Sure, a couple of the rigs I saw were pretty small ... probably devoted to work-over rather than making new hole. But even those small rigs represent business ... some company is leasing them from another company, and paying a crew to work them. In all cases, money is changing hands, goods and services are being produced and consumed, people are being employed and royalty-owners probably found their Christmas stockings to be a little fuller than they had expected.

I know, I know, I know ... a majority of our local punditz - at least those who focus upon the state of our local community and its economy - insist that everything pretty much sucks. Yet, in spite of all that, as a result of my December Dashboard Survey through Midland and Dawson counties - no matter it's lack of thoroughness - I can't help but feel some optimism. I have hope that things are going alright in our little corner of the country, and getting better ... and I have in mind a prayer of thanks for what we have, and that our good fortune might spread.
Posted by Jeff at 7:55 AM No comments:

Me? I was going crazy last night, watching first one Steeler team, then another take the field. THANK GOODNESS the first team returned to close-out the game!

"Seventh heaven? ... Not quite yet," Dean Kovacovic cautions in this report in the Pittsburgh Post-Gazette. "That could come next for the Steelers, who won the chance at an unprecedented seventh Super Bowl crown by staving off the New York Jets, 24-19, in the AFC championship game Sunday night at Heinz Field. Ben Roethlisberger passed for 133 yards and a critical completion to avert a huge collapse, Rashard Mendenhall rushed for 121 yards, and a record crowd of 66,662 celebrated by waving Terrible Towels through equally terrible temperatures."

The final challenge for Pittsburgh will be Green Bay in Super Bowl XLV on February 6 in Arlington, Texas. The Packers won the NFC championship earlier Sunday, 21-14, in Chicago. A Super Bowl just four hours up the road! With my Steelers!!! Now, if only I had a thousand bucks, or whatever it would take to get inside the stadium and watch the game :-(

Ah, well ... in the meantime, I can always get a Steeler Nation iPhone App ... and warm-up my Terrible Towel for February ... hope I remember how to do it ...

"Though it is embarrassing to admit this in public, I can no longer hide the truth. I have a Sarah Palin problem," Dana Milbank writes in an opinion piece posted earlier this week on at the Washington Post's website. "I have written about her in 42 columns since Sen. John McCain picked her as his vice-presidential running mate in 2008. I've mentioned her in dozens more blog posts, Web chats, and TV and radio appearances. I feel powerless to control my obsession, even though it cheapens and demeans me."

"But today is the first day of the rest of my life. And so, I hereby pledge that, beginning on Feb. 1, 2011, I will not mention Sarah Palin - in print, online or on television - for one month. Furthermore, I call on others in the news media to join me in this pledge of a Palin-free February."

Milbank admits to a media obsession with Palin ... and to having done his part to nurture and maintain that obsession. He goes on to note that abiding by such a pledge would be difficult at best, and that there may be consequences ...

"It's impossible, I figured, because Palin is a huge source of cheap Web clicks, television ratings and media buzz. If any of us refused to partake of her Facebook candy or declined to use her as blog bait, we would be sending millions of Web surfers, readers, viewers and listeners to our less scrupulous competitors."

In closing, Milbank calls upon others to do their part, to take a pledge of their own, prompting me to wonder whether I should risk alienating my readers, and reducing my reader-clicks from the double-digits down to the single-digits ...

"And so I pledge to you: Sarah Palin's name will not cross my lips - or my keyboard - for the entire month of February," Millbank announces. "Who's with me?"

3. Then join the fun, and stick your head in a freezer

(There's an interesting story behind this, which isn't as "new" as some believe)
Posted by Jeff at 12:05 PM No comments: