In Flanders Fields the poppies blow
Between the crosses, row on row,
That mark our place; and in the sky
The larks, still bravely singing, fly
Scarce heard amid the guns below.
We are the Dead. Short days ago
We lived, felt dawn, saw sunset glow,
Loved, and were loved,
and now we lie
In Flanders fields.

Take up our quarrel with the foe:
To you from failing hands we throw
The torch, be yours to hold it high.
If ye break faith with us who die
We shall not sleep,
though poppies grow
In Flanders fields.

Here in the U.S., one doesn't see the poppies on people's lapels so much, as we used to when were children ..... One of the most ridiculous victories in America's 'war of drugs' was the declaration by 'drug czars' and their staffs that the poppy reminded people of addiction to drugs, rather than appreciation to those who gave the 'last full measure of their devotion' in service to their country. Such is not the case in Canada, England, and other countries that once formed the 'Commonwealth.' The paper poppies - and the fundraising for veterans' relief that they represent - have been prominent in photos and video the past couple weeks. 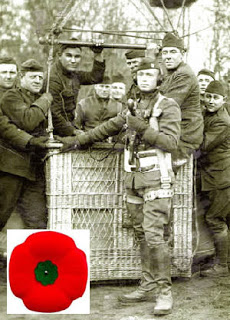 Armistice Day, Remembrance Day, Veterans Day ..... call it what you will ..... but find some way to mark this day. Here, in America, the focus of the day has been expanded to honor all men and women who, throughout history, have answered their country's call to serve. There have been many in our own family, but - mindful of the origins of this particular holiday - I will tell the boys of their great-grandfather Frederick, a sergeant with the 102nd Balloon Company, U.S. Air Service, American Expeditionary Force, and his service in France during the First World War.

Looking back over the weeks leading up to Election Day, as the idea circulated that response to election results might include protests, I noticed the focus was almost entirely upon candidate Donald Trump and his supporters. Little or no mention of candidate Hillary Clinton and her supporters ... but then, depending upon your news sources - and your personal views - there would be no cause for complaint from that camp, come Wednesday morning.

Which brought us to that Wednesday morning, and a 'Dewey defeats Truman' moment for the new century. So, what is the proper response to that moment, for Clinton supporters? Via texts, tweets, blog posts and online chat rooms, I've heard from a number of them - their outrage over the results, their fears over what life will be like 'with Trump in charge, their tears and their anger ... and from some, a call to hit the streets and share all of that with the general public.

I'd like to propose another response for supporters from BOTH camps ... prayer.

Me? I'll be praying as someone who entered the voting booth less-than-enthusiastic about both of the major party candidates for President, prepared to take a co-worker's advice to 'hold your nose, lean in and press one of the buttons.' I cast my vote ... and I wish that more people across the country could say. But now, it's time to deal with the results.

I pray for his success as President of the United States. As current President Barrack Obama said following a meeting with Trump at the White House, "If you succeed, the country succeeds." I was encouraged by the demeanor of both men following that meeting, and the tone of their comments about one another considering what has passed between them over the preceding years ... funny how your view of someone might change once you have ACTUALLY met that someone face-to-face, looked them in the eye and shaken their hand ... for all that has passed between them in those preceding years, this was their first ACTUAL meeting.

And so, I pray ... and I urge all of you who are open to faith, regardless of your religion or denomination, to do the same. And remember, there will be opportunities for ALL of us to speak and work towards helping our nation succeed.