A most remarkable 'nobody' 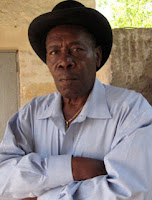 From a post and link on Jimmy Patterson's Facebook page, I have just now learned of the passing of one of the more remarkable individuals I have ever met ... one who was once without hope, but went on to find hope and share it with countless others ... one who described himself as a 'nobody,' yet was anything but.

Denver Moore, a most remarkable 'nobody,' has entered the church triumphant. According to this report from worldmag.com's Mickey McLean, "on Saturday, March 31, after several years of ill health, Moore, 75, died, or, as Ron Hall shared in an email, 'The gates of heaven swung open … and Denver Moore went walkin’ in!' A memorial service for Moore was held [Thursday] at McKinney Memorial Bible Church in Fort Worth." 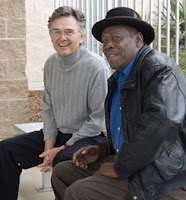 So many of us came to know Moore and Hall - and a third remarkable individual, Hall's wife, Deborah - through their book "Same Kind of Different as Me," and it's follow-up, "What Difference Do it Make?" It's hard to imagine two such men ever meeting each other, let alone becoming such friends ... so maybe it should be no surprise that the meeting and the friendship led to such a wonderful and inspiring story, and mission.

That mission included many, MANY appearances on radio and television, in the newspapers and magazines, and on the road, speaking to crowds of every shape and size. It was during one such appearance that I got to meet them. It was four years ago, and Moore and Hall were in Midland, speaking at an evening praise service organized by First Presbyterian Church and True-Lite Christian Fellowship.

To say that the main sanctuary at First Prez was packed, would be putting it mildly ... every seat was filled, people were standing along the walls, seated on the floor in front of the first row of pews, some had even hopped up onto the sills at the foot of our stained-glass windows ... the house WAS packed, and it ROCKED ... due in no small part to True-Lite's music ministry, which set the perfect tone for the evening.

Hall was the first of the two to speak, and then it was Moore's turn. His testimony was delivered in a manner unfamiliar to some ... at times, he spoke, and told a story .... then he'd quote Scripture ... other times he'd break into song. Our friends from True-Lite were in the groove from the start ... but it was incredible to watch how Moore brought some of my fellow Presbyterians (I've heard us called the 'Frozen Chosen') to their feet, then their hands went up, and then they started shouting in response to the testimony.

WHAT A GREAT EVENING!

I've already spoken to a couple of others who were there at First Prez that night, and they had the same response as mine ... a mix of sadness and happiness ... "Well," said one, "he's with Miss Debbie now."

“Tell ’em I’m a nobody that is tryin’ to tell everybody about somebody that can save anybody,” Moore once told Ron Hall.

“That ‘Somebody’ was Jesus,” Hall wrote shortly after Moore’s passing, “and Denver woke up in His arms on Saturday. His famous quote and the final words in his book are ‘We are all homeless workin’ our way home.’ Welcome home friend; you were a good and faithful servant.”

the day before The Day


Big day, tomorrow ... and not just for all Christians, but for all peoples ... that's what I believe.

"We are the Easter people," Pastor Jim Miles of First Prez-Fort Stockton reminds us ..... and that is what we affirm tomorrow, the day for which we have prepared over the past six weeks, the day for which we live at all times. A promise was made on a joyful, star-lit night, in a stable in Bethlehem ... but that promise was kept on a bloody, storm-darkened day, on a hill outside of Jerusalem. 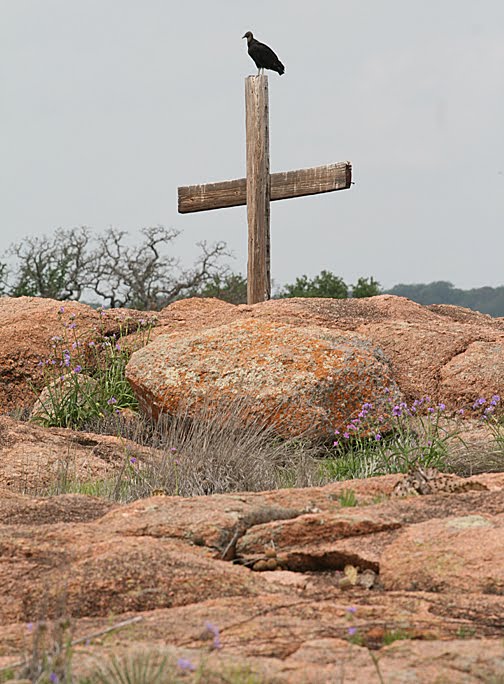 Big day tomorrow, celebrating the resurrection of Jesus Christ ... big day ... THE day, really. But I find myself wondering what it was like the day before The Day ... what was it like during those long hours that passed between Christ's crucifixion and his resuurection? I can't help but think it's easier for us, two-thousand years later, with the benefit of hindsight. But back then ... right then, right there? What was it like for the followers of Jesus on THAT very first day before The Day?

I've always felt a little sorry for Peter, one of the first (and perhaps the greatest) of Jesus' disciples. How many times have I listened to some discussion in Sunday school that included talking some smack about Peter and his shortcomings ... it's especially pronouced now, as we are reminded for the umpteenth time of his denial of Jesus outside the house where Christ was being held. What must it have been like - that day before The Day - for Peter?

Of course, that was Peter before The Day, and before Pentecost. The man that emerges from all that is someone and something else entirely. There is still a growing, learning, developing spirit and awareness in him ... but there is no longer any doubt, or any denial.