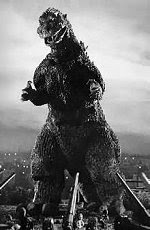 It was on this day in 1954 that Godzilla – “King of the Monsters,” Japanese movie icon, and the world’s foremost community DISorganizer – first unleashed his fury.
It’s been more than half-a-century since Godzilla – the product of an evolutionary process gone haywire from the testing of atomic bombs – was awakened, and set off on the first of his many deadly rampages. 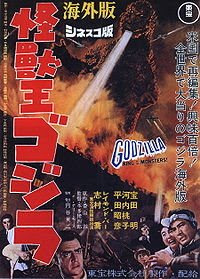 For many of us in the United States, our introduction came through an “Americanized” version of the Japanese original, with added scenes and narration featuring Raymond Burr. The re-working is actually done pretty well, and “Godzilla: King of the Monsters” still remains my favorite of the 25-30 films that feature the creature … a career that eventually landed him a star on the Hollywood Walk of Fame, and a Lifetime Achievement Award from MTV.
Here’s Wikipedia’s entry on Godzilla, and another entry on answers.com. You may also want to take a Godzilla Trivia Quiz.
Posted by Jeff at 7:55 AM