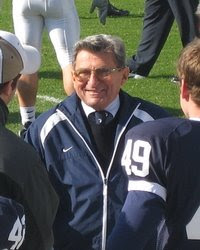 Joseph Vincent Paterno (and YES, as a matter of fact, I DO think he is the best coach in the history of college football) was born on this day in 1926.

In 2007, Paterno was inducted into the National Football Foundation and College Football Hall of Fame, one of only three to be so honored while they were active coaches. His speech at the time reflected much about the man and his thoughts on the game in which he has taken such and active part for sixty years ...

"I have mixed feelings because there were so many people that are not with me any more who made it possible for me," he said. "How good has it been? What we share in football; there's never been a greater game. We've been involved in the greatest game, the greatest experience anybody could hope for. Great teammates. Guys you could trust. Guys you loved. Guys you would go to war with tomorrow. We're so lucky ... we're so lucky. If we lose what we have in football, we'll lose an awful lot in this country and we've got to remember that."

A five-time Coach of the Year, Paterno is the all-time leader among coaches in bowl appearances (35) and post-season triumphs (23). His overall postseason record of 23-11-1 gives him a winning percentage of 69.1, good for No. 2 among coaches with at least 12 bowl visits. The Nittany Lions are 16-7 in New Year's games under Paterno and 12-4 in contests that comprise the Bowl Championship Series.

Here is his
official Penn State bio page, and his write-up on Wikipedia
Posted by Jeff at 7:55 AM

Merry Christmas, Jeff. I hope you and your loved ones have a very wonderful Christmas.