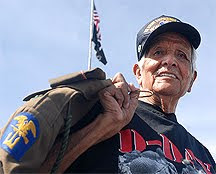 It was with great sadness that I read that Sal Guererro of Odessa, a pioneer and a patriot with a legacy of "exceptional volunteerism and love of his country," has died.
CLICK HERE to read the rest of this story from the Odessa American's Laura Dennis (right, OA Photo)
I first met Sal in the 80s, working a camera on the studio floor at KMID-TV/Big 2, as he (along with Roger Robles and Gracie Reyes) were recording weekly episodes of Mexico Tejano. We would touch-base again a few years later, after I was laid-off at 2, and was working as a freelance writer. One of my assignments was a feature-length piece on Sal, for Nueva Vista, a weekly bilingual publication of the Midland Reporter-Telegram.

Sal and I spent a long and wonderful afternoon at his home in south Odessa. His life provided enough material to fill a book ... in fact, it DID fill a book, and Sal was kind enough to present me an autographed copy at the end of our interview.

Sal's early life, living and working in Texas was something many of our Hispanic pioneer families would recognize. But his life took a dramatic turn when he enlisted in the Army, and fought in World War II. Sal was a combat engineer - and those of you with some knowledge of the military profession know what a hazardous job that can be.

Like so many vets, Sal came home with a determination to play an active role in his community and his country, to serve and work for its preservation and - when necessary - its improvement. Most of that determination and that work would play out in Odessa, where Sal moved in 1947. He was active in Scouting, youth athletics, radio and television broadcasting, veterans affairs, voter registration, politics (Ector County commissioner) and so much more. At times, the impact of his efforts reached outside Ector County - he was a charter member of the American GI Forum, for example, which had an impact across the Lone Star State.