The 2009 edition of an annual green chili promotion at H.E.B. is over and - once again - the Midland store has finished in the #1 spot!

A few weeks back, I offered this post about H.E.B. roasting and selling fresh green chili peppers from Hatch, New Mexico.

At that time, I noted that the Midland H.E.B. had the most successful fresh-roasted chilis program in the chain in 2008, winning a free trip to Hatch, New Mexico, for Dustin and Victor (shown in a 2008 photo). 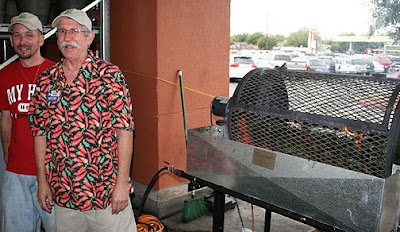 But that was then, and this is now ... let's all do our part, I suggested, to spice up our kitchens, fill those nooks and crannies in the freezer (to help get us through the cold winter), and make Dustin and Victor H.E.B.'s top chili-heads for two years in a row!

And, according to Victor, that's exactly what we've done. Even more impressive - for me, at least - is that the stores don't compete on a per-capita basis, accounting for the size of the community in which they are located. Rather, the store's success is measured simply by how many pounds of this precious produce they sell ... big city, small city, whatever - it's all the same.

So, congratulations to Midland's H.E.B. - and especially to Victor, Dustin ... and Rosemary, who was part of this year's crew. And, way to go, Midland shoppers and connoisseurs ... you put the GRRRR in green chili!