The Man Behind the Stopwatch .....

Don Hewitt, the CBS Newsman who invented “60 Minutes” and produced the popular newsmagazine for 36 years, died Wednesday. He was 86. 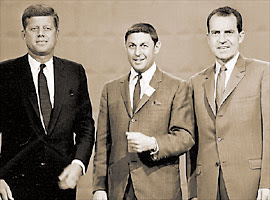 "Hewitt joined CBS News in television’s infancy in 1948, and produced the first televised presidential debate between John F. Kennedy and Richard Nixon in 1960. He made his mark in the late 1960s when CBS agreed to try his idea of a one-hour broadcast that mixed hard news and feature stories. The television newsmagazine was born on September 24, 1968, when the '60 Minutes' stopwatch began ticking."
CLICK HERE to read the rest of this report from AP's David Bauder
Producers are among the unsung heroes of television news. While they, themselves, may not step in front of the cameras, you feel their impact in each and every broadcast. News consumers may focus soley upon their point-of-contact, the news anchor or the reporter in front of the camera, in appraising the product, it's success ... and, yes, its failure. One of the greatest benefits I had from working in the business was the chance to be a part of the work behind the camera, and to know and appreciate the wide variety of professionals who contribute to a news broadcast.
Posted by Jeff at 5:55 AM