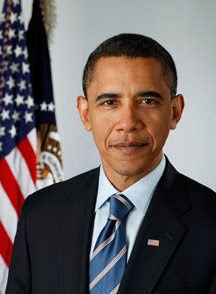 A belated "Happy Birthday!" to President of the United States Barack Obama, born August 4, 1961, at the Kapi'olani Medical Center for Women & Children in Honolulu, Hawaii, United States, to Stanley Ann Dunham, an American from Wichita, Kansas, and Barack Obama, Sr., a Luo from Nyanza Province, Kenya.

Okay, okay so he barely qualifies on a technicality. Figures it was Hawaii. We're all dealing with it, but it's not easy for us law-biding, tax paying, middle-income folks. The increasing shift from middle income to low income families is rapidly growing because of his policies. I'm just holding my breath until the next election so they can undue the damage going on.

Yeah, Gilbert ... I guess you're every bit as upset about John McCain, Barry Goldwater and others - today, and throughout history - who have stepped-up to serve their country in various capacities ... and 'barely qualified on a technicality' when it came to citizenship.

Only the position of Presidency (and VP) of the United States requires being a natural-born citizen of the USA. Neither of those you mentioned served as president. McCain was born on a US Navy base (Panama Canal Zone) which is considered US soil. Barry Goldwater was born in Phoenix AZ.

Right on Gilbert. Did you see "Sounding Forth's" local blog about being another statistic? A female exec who lost her job due to the poor economic situation and not her excellular performance. Who's next?

Who's next to lose their job? Might be you or me! Or maybe even Jeff! I guess we'll have to deal with that too like so many others already are around the country.

You guys (?) are a real hoot! Thanks for the chuckles!

As for Janie, maybe she appreciates your generosity in desiganting her the 'poster child' for the recession, and maybe she doesn't. But she remains a friend of mine (in both the actual and the virtual worlds), and knows that she (and That Man She Loves) are in our thoughts and prayers.