Happy Birthday to a Film Favorite 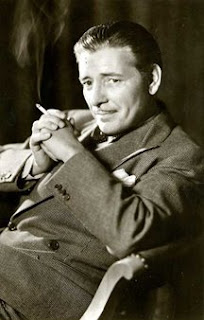 Ronald Colman, award-winning actor of stage and cinema, radio and television - and one of my favorite stars of the cinema - was born on this day in 1891.

Colman was a man of another time and another place then those we now know, but his performances continue to capture us and move us. Maybe it was his good looks ... maybe it was his charm ... maybe it was that voice of his, and his wonderful delivery, which served him so well when he made the move from silent films to 'the talkies.' Or maybe it was all of the above, brought together in one very special package.

We might never have come to appreciate him, if he had pursued his original intention to study engineering ... or if his service in the Great War had taken a tragic turn. Things were different back then, especially in England, where few were content to remain at home. Colman - along with fellow actors Claude Rains, Herbert Marshall and Basil Rathbone - enlisted in the army, and was among the first to fight in World War I. In 1914, at the Battle of Messines, Colman was seriously wounded by shrapnel in his leg, which led to his being released from service.

You have to wonder, though, if that service left an indelible mark upon Colman and upon what he would bring to the characters he played in the course of his career. Some of my favorite performances by him are all characters who have been out in the world, and have come home with weariness and wounds from that experience ... Robert Conway in "Lost Horizon," Dick Heldar in "The Light That Failed," John Smith in "Random Harvest" and Sydney Carton in "Tale of Two Cities"

But whatever the role, Colman always brought a sese of grace and style, even panache to his portrayel that was not easily duplicated, no matter how often filmmakers might try in later re-makes.

There aren't very many (non-subscription) online resources for Ronald Colman (at least, when compared to other stars). There is his Wikipedia Write-up, and pages devoted to him on Internet Broadway Database and Internet Movie Database.
Posted by Jeff at 7:55 AM