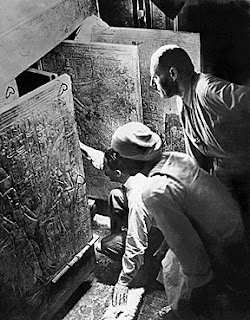 A day of special significance in my earlier life and vocation as an archaeologist ... on this day in 1923, the burial chamber of King Tutankhamen's recently unearthed tomb was unsealed in Egypt by Howard Carter.

There was something of the adventurer in Carter, which comes through in his own first-hand account of his discoveries and revelations in a forgotten corner of the Valley of Kings. His words have played some part in the decision of many who chose to follow in his dusty footsteps.

"With trembling hands, I made a tiny breach in the upper left hand corner... widening the hole a little, I inserted the candle and peered in... at first I could see nothing, the hot air escaping from the chamber causing the candle to flicker. Presently, details of the room emerged slowly from the mist, strange animals, statues and gold - everywhere the glint of gold..."

"... I was struck dumb with amazement, and when Lord Carnarvon, unable to stand the suspense any longer, inquired anxiously, 'Can you see anything?' it was all I could do to get out the words, 'Yes, wonderful things."'

Even for those who have not taken up the trowel, it's heady stuff ... the stuff of legends ... the stuff of cinematic fantasy ... but THIS was the real thing, and it still catches hold of our imaginations, and it doesn't let go. Here is how the news of that day was brought to the public's attention, on the front page of the New York Times

How cool! WE have yet to make it over to gak...Big D...to catch the King Tut exhibit, but we plan to.

I wonder if they have Steve Martin's version of Tut playing at the exhibit - giggle.

Cowtown Pattie, so good to see you again, ma'am! Yes, it is a must-see. It is different from the previous King Tut exhibit, which I saw back in the late seventies, but WELL WORTH your visit!

An archaeologist? Hey, I didn't know that. I bet you've seen some of Texas few others have seen. If you ever run out of things to write about I for one would love to read about it.

The Iraan Archaeology Society has a few excursions into Indian country each year, but so far I've been unable to participate.