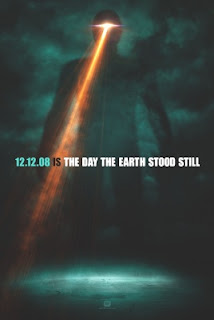 I have traveled across the darkest reaches of outer space to bring you an apocolyptic warning ... see the new "Day the Earth Stood Still" at great peril to your sensibilities and your wallet!!!

I saw the film earlier this week, and I begrudge even the discounted matinee price that I paid. And I'm seriously reconsidering my stance as an envronmentalist ... it really is that bad.

Today's filmmakers hesitated to call this a "remake" of the classic film from 1951, prefering the term "re-imagining." That's good, really ... I'd hate to think some youngster would go see the current film, and wonder why his or her parents go on-and-on about the old film ... probably attributing it to the advanced dementia that most teens assign to anyone over 30 years-of-age.

Was anything good about the movie? Well, yeah ... the special effects were pretty spectacular ... and its already earned several times the first film's total gross of box office receipts ... and those are probably the only advantages this re-imagining had over the original, which arrived in theaters 57 years ago. 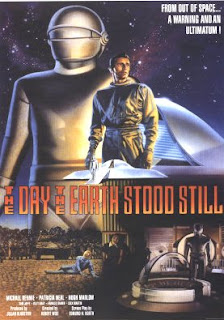 What is it about that early film that has struck such a chord? According to its write-up in Wikipedia, "the movie is ranked seventh in Arthur C. Clarke's List of the best Science-Fiction films of all time, just above Stanley Kubrick's 2001: A Space Odyssey ( for which Clarke himself wrote the screenplay). In 1995, The Day the Earth Stood Still was selected for preservation in the United States National Film Registry as 'culturally, historically, or aesthetically significant.' In 2008, it was voted as the fifth best science-fiction film ever made as part of the AFI's 10 Top 10. Lou Cannon and Colin Powell believed the film inspired Ronald Reagan to discuss uniting against an alien invasion when meeting Mikhail Gorbachev in 1985. Two years later, Reagan told the UN, 'I occasionally think how quickly our differences worldwide would vanish if we were facing an alien threat from outside this world.'"

And that comment was inspired by a film that raised the hackles of McCarthyites (the neo-conservatives of their day) for what one reviewer called "certain subversive elements" and for the inclusion in the cast of Sam Jaffe, a liberal who was allegedly sympathetic to communism. Somehow, the film rose above the rhetoric - something about the film transcended the political posturing, and prompted us to ask deeper and far-more-important questions of one another ... and of ourselves.

One other point I'd like to make before climbing off my soapbox ... one that I've made about other films in the last few years. The sensibilities of modern society, and the reflections of those sensibilities in modern filmmaking, do not necesarilly make better movies. I'll cite just one instance in the new film - the role of Helen and Bobby (Jacob in the new film). Of course, we can't have a loving and supportive relationship between a parent and child ... at least, that's how it seems sometimes. So we have to make her a cold stepmother, and him a rebellious stepson. In the early film, Klaatu's chance to see the world through their eyes, and to share a part of their lives, provides him the hope that this world might yet be redeemed ... not in the current film ... that will have to come later.

By the way, the original film was inspired by Harry Bates' 1940s short story, "Farewell to the Master" which you can read here ... but be prepared for a different story!
Posted by Jeff at 12:55 PM

On the topic of modern filmmaking in general, there's this perverse notion that eye candy alone can carry a movie. Science fiction movies are especially bad about this, and I can think of few examples that're quite as true as the second Star Wars trilogy.

Back in the 70s, digital effects were unheard of and cost an exorbitant amount of manpower and money to apply. So, Lucas' Star Wars made use of lots of models, physical effects, and cheats to accomplish as much as possible as cheaply as possible. It was a masterpiece!

Now, computer effects can be done with any sub-$1000 PC and a few hours. So, directors often pepper their films so liberally with fluff that they overlook the substance that's needed to make the eye candy matter.

Compare the original Indiana Jones film to that of the latest atrocity where my hero was effectively raped and discarded. The "Crystal Skull" is not only a crappy film, but a slap in the face of diehard Indy fans. Too much fluff, not enough substance. And what's wrong with allowing a man to age? A 60+ year old man shouldn't be able to outfight a dozen guys half his age - he should rely instead upon the wisdom of his years to outwit them.

Rob, you're absolutely right ... and far from alone in your thoughts. A couple years back, Jim at Serotoninrain and I were discussing the new Transformers movie - eye candy to the max, but that was all the movie brought to the screen. I still find myself wishing that they would have taken the technology, and applied it instead to the characters and storyline of "Megas XLR" ... now THAT would have been awesome!

As for Star Wars ... I'm afraid we're starting to show our age! Fans of the first trilogy arguing with fans of the second trilogy ... just as fans of TV's Star Trek/Kirk would argue with fans of Star Trek/Picard(et al).

Thanks for stopping in, and contributing.

Jeff, thanks for confirming my fears about this movie. We were discussing it last night over dinner with friends, and when I pointed out the terrible reviews, one of them said, "that probably means it's a great movie!" That is often the case, of course, as reviewers bring their own prejudices and preferences to their comments and they don't necessarily match mine. But the better I know the reviewer, the more credibility his or her observations carry...and yours are impeccable in that regard!

We'll save our money and hope that "The Spirit" delivers later this month.

Eric, I enjoyed the storyline and loved the look of "Sin City," so I find myself really looking forward to "Spirit." In a very different vein, I'd also like to see "Doubt." And I'm more-than-a-little curoius to see how "Benjamin Button" - based on some out-of-the-ordinary Fitzgerald - adapts to the screen. Really, not a bad holiday season for filmgoers.

"Button" looks interesting to me, as well. I'm a fan of Brad Pitt anyway; I think he's an underrated actor.

I guess I've missed seeing anything about "Doubt." I'll have to take a look. But Tom Cruise's "Valkyrie" is getting some good press also.

Eric, you can google "Doubt" the movie, and the stage play from which its adapted. The true story behind "Valkyrie" is one heck of a tale and I, too, am interested in seeing how it fares on film.

I really enjoyed Sin City for it's unique look & feel, but also because it still had fairly solid storylines. "300," by comparison, was lush and eye-popping, but there was far too little substance to carry the fluff.

I'm a big fan of Robert Rodriguez because he has traditionally avoided high-dollar visuals in favor of quick & dirty cheats to get a reasonably-similar effect. I'm a little worried that he's gotten so chummy with Tarantino, tho. QT does dialog like nobody's business, but his slackjawed retro, gratuitous approach to most of his films is just a bit more than I can tolerate. I thought the 2nd of the Kill Bill set was far better because it avoided all of the wave after wave Japsacky slugfest nonsense that the 1st film got so mired down in.

Rob, I am also a great fan of Rodriguez and his work ... and I LOVE watching the evolution of both plot and characters - as well as directorial style - through his "Mariachi" trilogy.