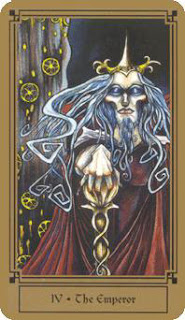 Thanks to a link from Cowtown Pattie, at Texas Trifles, I have confirmed that .....

I Am the Emperor

The Emperor is the great authority figure of the Tarot, so it represents fathers, father-figures and employers. There is a lot of aggression and violence too.

The Emperor naturally follows the Empress. Like an infant, he is filled with enthusiasm, energy, aggression. He is direct, guileless and all too often irresistible. Unfortunately, like a baby he can also be a tyrant. Impatient, demanding, controlling. In the best of circumstances, he signifies the leader that everyone wants to follow, sitting on a throne that indicates the solid foundation of an Empire he created, loves and rules with intelligence and enthusiasm. But that throne can also be a trap, a responsibility that has the Emperor feeling restless, bored and discontent.

What Tarot Card are You?
Take the Test to Find Out.

Oh Emperor, my Emperor!
Rise up and hear the bells;
Rise up—for you the flag is flung—for you the bugle trills;

And Walt Whitman will haunt my dreams tonight with a six-gun.

Ha ha! This is cool. Gonna have to try it.