With Memorial Day rapidly approaching, and with John Wayne's birthday (a centennial celebration) coming up in just a few days, expect to see A LOT more than the usual amount of war movies on television.

Today, it's The Horse Soldiers (1959), in which a Union cavalry regiment is sent behind Confederate lines to disrupt and destroy rebel resources, communications and supply centers. The film was directed by John Ford, who has always earned high marks with me when it comes to the attention paid to authentic details in his films.

But that doesn't mean he wasn't ready to engage in a little artistic license, in order to tell a good story. The bulk of the film is inspired by Grierson's Raid, part of General U.S. Grant's Vicksburg Campaign. 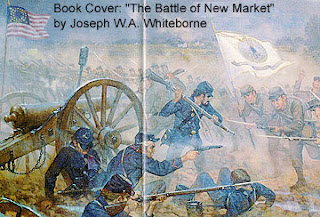 But, a particularly moving part of the film is taken from another, little known battle, the Battle of New Market ..... you know the scene, in a desperate attempt to hold off the Union forces, the rebel commander drafts the corps of cadets from a nearby military academy ..... it really happened ..... just ask anyone from the Virginia Military Institute.

In the movie, it's an occasion for high spirits, even some laughs, as the cadets seek to close with the seasoned Union troops, voices that have not yet been touched by puberty raising their rebel yells to especially high levels. One of them is even captured, and spanked before the Union troopers retreat, yielding the field and the day's glory to the gallant youngsters.

After a four-day, eighty-mile march, VMI's Corps of Cadets did indeed close with the enemy at the Battle of New Market, enduring rifle and artillery fire from the Union positions, meeting and repelling a Union charge, then launching a charge of their own, capturing prisoners and artillery pieces, and spurring a Union retreat.

The field, and the glory was theirs' .... but not at the cost of just a spanking. Ten of the cadets were killed outright, or died later from their wounds. Another 45 cadets were wounded in the action. The boys ranged in age from fifteen- to seventeen-years, though some accounts claim some of the cadets were as young as twelve-years. You can visit the battlefield - virtually - at its website. If you get a chance, though, I recommend actually visiting the site ..... for depth of history, culture and natural beauty, it's hard to beat a tour of Virginia's Shenandoah Valley.

By the way, I said earlier that I always appreciated Ford's attention to authentic detail. In the movie, the school has been renamed the Jefferson Military Academy. Among those cadets killed at the Battle of New Market was Thomas Garland Jefferson (a descendant of President Thomas Jefferson) ..... not a coincidence, I think.

I know where your TV is tuned during lunch.

I caught the first part of "Horse Soldiers" myself, and made a note for a possible movie quiz post about the film that featured the following three character actors: Hoot Gibson, Strother Martin, and Denver Pyle. But you scooped me. ;-)

Eric, thanks for stopping in. Several servings of 'The Duke,' in the days ahead will be a dramatic improvement over that 'Funniest Movies' program ..... and will probably provide plenty more topics for movie quizzes.

Drat! I missed it. But thanks for the reminder of John Wayne Week on TeeVee. I'll set the DVR.

Les, you're welcome .... and thank YOU for stopping in.