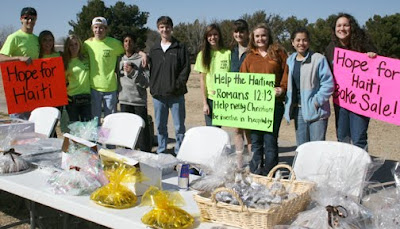 Midland youth held a bake sale this weekend, raising funds for Presbyterian Church USA Disaster Relief
If you have concerns over where your contributions to Haitian earthquake relief efforts may actually be going, you can - to borrow a phrase from the environmental movement - think globally and act locally.

There are no lack of local groups - made up of your friends and neighbors, their kids, their schools, their churches - that are connected with legitimate national and international organizations already on the ground and hard at work in Haiti, providing invaluable first-hand feedback on what resources are most needed, and where they are best applied.

Here is just a small sampling ...

The Catholic Diocese of San Angelo has also called upon its churches across West Texas to step up and help Catholic Relief Services. In a statement released last week, Bishop Michael Pfeiffer is asking every parish and mission of the Diocese to send a donation, or take a collection, to help earthquake victims, and has promised that all funds will go to their relief, especially through CRS.

Buckner International is well known for it's humanitarian support around the globe. But it also has a local office working to get your relief contributions to where they are needed. Last week it was reported that the local division is planning to play a huge role in supplying the people of Haiti with basic needs - shoes and socks. And this is just one of the efforts under way at Buckner.

Not the same kind of local ... but there's also efforts under way by the Indianapolis, Indiana-based ServLife International, which was founded by Joel Vestal ... there are many in the Tall City who know Joel, and probably many more who remember his grandfather, Daniel. Recently, ServLife announced it had the ability to fly directly on a military-cleared plane directly into Port-au-Prince, Haiti and deliver Emergency Medical Packs as part of their Strategy for Relief and Response to the Haiti Earthquake.

Like I said, just a sampling ... I'm sure you'll find plenty of organizations out there you can trust to put your contributions to the good use you intended.

EDITOR'S NOTE: I would have linked you to the website for the local chapter of the American red Cross, but that site was having trouble this weekend. You can contact their local office at: 9601 Wright Drive, Midland, TX 79711, (432)563-2267, or visit the national organization's website at www.redcross.org
Posted by Jeff at 5:05 PM