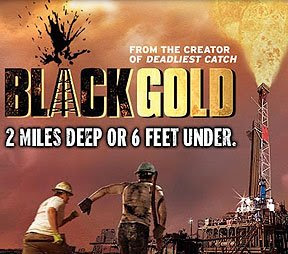 This week, I tuned-in the premier episode of Black Gold with a mixture of curiosity, anticipation and dread. Having watched it, I must admit this latest reality TV foray into West Texas really ain't so bad.

"From the creator of Ice Road Truckers and Deadliest Catch comes a one-of-a-kind series about Texas oil men who gamble everything for a chance to strike it rich," we are told. "Wildcatters risk their life savings and roughnecks risk their lives. Black Gold takes you inside the action as the race for oil heats up."

"In West Texas, three crews of roughnecks hit the ground running in the race to find oil, but all three face disaster on day one. The Viking rig has all the advantages that come with being state-of-the-art, but the crew can barely get the system started. And on the tried-and-true Longhorn rig, the smallest roughneck, Peanut, is crushed by a piece of equipment. Will one crew leader not survive the end of the first week?"

No mention of the third rig in the promotional write-ups ..... although once I saw them on the show, I thought, "Oh, THAT's their disaster."

And I DID get involved in the show, discussed it with My Favorite Landman, watched it to the end and found myself looking forward to the next episode ... which is more than I could say for 2007's Making News: Texas Style, the really bad reality show set in a West Texas television newsroom.

For me, production has a lot to do with the appeal of Black Gold. Just watching the end product, you can tell that a lot more thought, time, effort, people, equipment and money were spent on the shooting, editing and production of this show. Sure, occasionally one camera crew strays into another camera crew's shot - but the total coverage is so much better. AND, there's so much more of it. I saw and heard more product in this first one-hour episode of Black Gold than I did in the first 2 1/2 one-hour episodes of Making News: Texas Style.

And, frankly, with apologies to the men and women in MN:TS - some of whom I have known and worked with for 20+ years - I think the story in BG is more interesting.

I do have a problem with the narration of Black Gold being over-the-top in its writing and its delivery. But I guess that's the nature-of-the-beast nowadays ... television audiences - especially reality TV audiences - simply aren't interested in a more straightforward presentation.

Another problem with the narration involves the description of some of the people you meet in the first episode, and their company. The copy sounded as though it was written by the company's PR office ... it sure was at odds with my perception of said entities, developed over years of observation.

A comment from MFL thought that the whole process seemed a little over-simplified ... 'whichever crew gets down there first, will get the oil and make millions of dollars.' Sill, she enjoyed the first episode, and will probably watch the next.

Jeff, I enjoyed the episode enough that I've bought a season pass via iTunes in order to save the complete series, sans commercials.

I agree with everything you wrote, especially the comparison with that other "documentary" (although I found it more interesting than you did because it was all new to me). However, your mention of the camera crew getting into the shot is not a drawback in my opinion; it's a reminder that this is not a staged production but actual footage from a real life workplace.

I do think it's misleading to a large portion of the audience who doesn't know any better to imply that the oil reserves go to the rig that drills down to them first. It conjures up misconceptions of a big underground lake of oil that can instantly be pumped up by the first person to stick a straw into it. That couldn't be further from the truth, but I guess the producers felt that reality was too unexciting.

Still, this definitely qualifies as "must see TV" in my book.

Oh, by the way, if you're counting on watching future programs via TBS, you might be disappointed. I'm not sure they'll be running the episodes in next-evening fashion like they did this week; at least, there's nothing on their schedule for next Thursday.

For those of us without truTV, iTunes is the surest way to continue watching.

You definitely wouldn't see it on TBS.

Eric, you're absolutely right about the cameras showing up in each other's shots ... it does, as you say, "actual footage from a real life workplace." But is also illustrates my point that the producers of BG invested more in their product than the producers of MN:TS, which relied upon a single camera and photographer, and would be forced to cut away from some parts of a story, rather than covering it from multiple angles at once.

I'll be curious to see what TNT does do with their co-presentation of the program. Critical reviews of the show have been good, and it wouldn't be the first time that a series has aired in its entirety on different networks at the same time ("Torchwood" on BBC-A and HDNET, for example, "Tin Man" on USA or "Sunrise Earth" on AP and DISC-HD).

As for TBS, I suppose it could air on that network, but only by running one episode for two hours and constanly interrupting it for "Dinner and a Movie" or one of their other inane concepts.