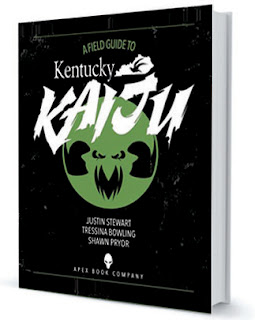 I was a total neophyte in just about every way as I opened my e-copy of “Kentucky Kaiju.” Graphic literature (comic books, back then) was not allowed in my home when I was young; I have not yet had the pleasure of visiting the state of Kentucky and enjoying its culture; AND, I have never encountered a Kaiju … though that last might be a good thing, judging by the creatures presented to me in this book.


Through illustrations by Justin Stewart and Tressina Bowling, and accompanying text by Shawn Pryor, “Kentucky Kaiju” takes readers on a tour of Kentucky that somehow did not make it into the pages of the state’s official tourism/visitor guidebooks.

Are there any Gojira/Godzilla fans out there, reading this? Imagine what might happen to the critters (domestic and wildlife) caught between a pair of massive explosions – one from a nuclear reactor, and the other from a massive bourbon distillery. What might emerge from that glowing and flavorful fallout?

“Kentucky Kaiju” has the answer.

At just fifty pages, with much of each page taken up by a single illustration, it may seem like a quick read. But I recommend taking your time with each page, preferably with a glass of your favorite Kentucky ‘sip’ close to hand. The illustrations by Stewart and Bowling are first-rate, and you’ll want to keep an eyes out for small details that add to the story of the Kaiju being presented, and to your enjoyment of that story.

The same is true of Pryor’s text … we’re not talking mere captions here. Once again – take your time, and enjoy yourself.

The closing page of the book assures readers that “‘Kentucky Kaiju’ Will Return” … I’m looking forward to it!
__________

NOTE: I received a free e-copy of this work through LibraryThing in exchange for a review.
Posted by WestTexasMissioner at 7:05 AM 13 comments:

An occasion where I DON’T take a knee

One week ago today, I was in the food court at Houston-Hobby Airport, waiting for a flight home following the latest round in my ongoing Texas Cancer Smackdown. This round had gone well, with good test results and encouraging words from the folks at M.D. Anderson.

For obvious reasons, I was in the mood to relax – even celebrate – with some lunch. The food was good, and a cold glass of local brew added to my enjoyment of the meal. Several feet away, the Apollo Chamber Players were performing light classical pieces as part of the airport’s “Harmony in the Air” program … all in all, I was in good spirits.

But then there was change, as Apollo switched gears and began playing “The Star Spangled Banner.” I stood up, and turned to face the performers for the duration of the song.

I didn’t have to, I guess … sitting at a table with company, in the middle of lunch, surrounded by many who continued on their way to-or-from their flight, or enjoying their meals, paying no attention to the music. This was followed by works of a similar vein … “America the Beautiful” and “My Country, ‘Tis of Thee” … it didn’t take long to realize this was Apollo’s recognition of this particular day, ‘9/11.’

As for “The Star Spangled Banner,” I would have been forgiven joining the majority and ignoring the music, myself … but I couldn’t.

This is the national anthem of my country … one that, for all its faults, I love and respect. And I am especially proud and respectful of what so many people have done, what so many have sacrificed to create and preserve this country. That includes the freedom I have to raise questions, to address faults and seek changes. There’s just no way I could NOT stand.

Nor will I take a knee, which has become sooooo fashionable now. I guess I’m getting old and crotchety, but I see a HUGE difference between Rev. Dr. King taking a knee in prayer – and in refusal to budge – in the course of his protests, and multi-millionaire pro-football player Colin Kaepernick briefly taking a knee in HIS protests.

Do I dismiss the presence of racism in America, and the sometimes-deadly consequence of that presence for ‘people of color?’ NO WAY. But there are people out there taking to the streets, risking so much more than Kaepernick – people who never had a fair shot at the success he has enjoyed.

I will say this … he has people talking about race – and that’s a GOOD thing. But aren’t there other problems we should be discussing – and SOLVING! – rather than whether or not teams will employ/start him because of his demonstration on race issues?

Like I said before, though, I’m grateful for the freedoms I enjoy in this country … and that includes the freedoms to choose. People like Kaepernick choose to kneel during our national anthem? Let ’em! AND MAY I BE COMPLETELY AND HAPPILY WRONG IN MY BELIEF THAT THEIR SIDELINE SHOW WILL ACCOMPLISH NOTHING SUBSTANTIAL.

But me? My choice? With a nod to Bernie Taupin, “I’m still standing … yeah, yeah, YEAH!”
Posted by WestTexasMissioner at 7:05 AM No comments: