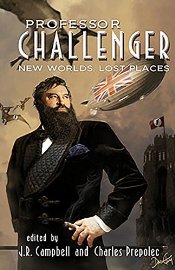 In the course of a prolific career that traversed a wide variety of genre, British writer Arthur Conan Doyle created - for me, at least - three singular characters. Over time, those three have achieved varying degrees of popularity and shelf-presence.

I have read all of Doyle's stories of detective Sherlock Holmes, and almost all his stories of Brigadier Etienne Gerard. In contrast, I have read only one of his Professor George Edward Challenger stories ... but what a wonderful story it was! And I am not at all surprised that it provided much of the foundation for “Professor Challenger: New Worlds, Lost Places” a collection of short stories inspired by Doyle's brilliant, headstrong and physical academician.

The stories were compiled by J.R. Campbell and Charles Prepolec, and I strongly recommend reading their introductions before proceeding to the stories themselves. These intro’s provide a very good background from which many of you will learn something new and useful ... I know I did.

As for the stories themselves, it should be no surprise that some appealed to me more than others ... although the general level is good, and I recommend them all. It’s just that some were less successful for me than others. One of those was Guy Adams’ and James Goss’ “Professor Challenger & the Crimson Wonder,” which is related to us in the form of a series of communications between the story’s characters. It’s not a bad idea ... it worked very well for Lawrence Sanders’ “The Anderson Tapes” ... but here, not so well. Still, though, I was intrigued enough to want to finish the story and find out how it ends .. it was just a little harder getting to that end.

Some stories that appealed to me more were those that captured – even in brief snippets – some of Doyle’s original story, and the exchanges between its characters. There are several with brief exchanges between Challenger and Edward Malone that display thr professors disdain for the ‘dim-wittedness’ of people in general, and the journalist’s public education in particular. Another was Stephen Volk’s “Shug Monkey,” which closes with an exchange between Challenger, Malone and Lord John Roxton that very much captured the spirit of an exchange between those same three characters in “The Lost World” ... a spirit of work to be done and adventures to continue.

More than a century has passed between the publication of these stories and thr novel that inspired them. So it should be no surprise that the passage of time and concurrent development of science and technology is reflected in the vocabulary. I have no problem with that. I also have no problem – welcome it, actually - with the stories including female characters of strength, intelligence and initiative who are allowed to do more than just scold the professor, or wail when said scolding leaves them set atop a high dresser.

My thanks to Campbell and Prepolec for assembling these stories ... and inspiring me to seek out and read the rest of Doyle’s stories of Professor Challenger. I recommend the - both this collection of stories, and the stories that inspired them - to you all.
__________

NOTE: I received a free e-copy of this work through LibraryThing in exchange for a review.