I am told J.P. Wagner covered a lot of ground and a lot of topics in the course of his career as a journalist. Having 'been there, done that' myself, I suspect it left him with an appreciation for a broad range of interests. 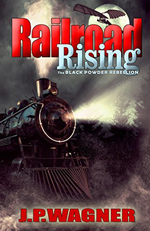 That certainly appears to be the case in his first published novel, Railroad Rising: The Black Powder Rebellion. Fantasy, action and adventure, swords and sorcery? Check, check, check. Steampunk, royal court intrigue, love story? Check them all off as well.

The story follows the adventures of Cartog, a young nobleman far down in the line-of-succession, and far-removed from any prospect of inheritance. Accompanied only by Yakor, his faithful retainer and a formidable master-of-arms, Cartog has set off on a journey to find his fortune elsewhere and make his own way in the world, perhaps as a mercenary.

They ride into a small town seeking employment ... but instead find themselves in the midst of a what appears to be an uprising and attempted kidnapping. This is the first of a series of events that will involve Cartog and Yakor in a growing conflict and circle of enemies, as well as a growing prospect for advancement and circle of friends. It could lead to great fortune in the long term, or death in the short term.

"Railroad Rising" was an easy read and enjoyable enough, with a straightforward story line and simple characters. But I have to agree with other LibraryThing Early reviewers who thought it could have used some editing, and some polishing to the story and characters.

And we might have gotten some of that, had it not been for circumstances far removed from the realm of Cragmor, in our own real and mundane world ... "Sadly," we read in the book's postscript, "J.P. Wagner passed away in 2015, before the publication of 'Railroad Rising.'" It is something I read with regret as I finished this book ... I was looking forward to Wagner's NEXT book.
__________

NOTE: I received a free e-copy of this work through LibraryThing in exchange for a review.
Posted by WestTexasMissioner at 7:05 AM