Added to my virtual bookshelf ... Living History: On the Front Lines for Israel and the Jews by Phyllis Chesler 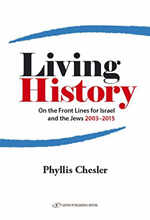 WARNING: Reading Phyllis Chesler's book "Living History: On the Front Lines for Israel and the Jews" may be hazardous to your sense of well-being. It could lead to increased levels of skepticism. This, in turn could lead to a variety of side-effects ... a willingness on your part to question what we are told about the world around us, to make an extra effort to gain more information. You may even find yourself rejecting what 'everybody knows and believes,' in favor of a view that is more complicated, more detailed ... and perhaps more truthful.

These were my thoughts as I came to the conclusion of the book, a compilation of selected articles and essays Chesler composed over a 12-year period as she documented a growing number of incidents that form part of what she describes as a “slow motion Holocaust.” It is a theme that is familiar to those who have read Chesler's works in the past. This was my first introduction to Chesler, and I found myself engrossed, article-by-article, page-by-page. All of it delivered in a style that is clear, concise and compelling.

The incidents she documents have a growing range, occurring in a variety of social, educational and cultural settings around North America and Europe. They also have a growing level of shrillness, as denunciations of 'all things Israel' are encouraged ... and dissenting voices are discouraged.

And it's not just the talk. There is the way 'Middle East issues' are reported in the media. And there are the calls for excluding pro-Israeli attitudes from public fora, from universities, even from churches. Then there is the growing movement to call-out corporations that do business with Israel, and moves to divest investment funds from those corporation who won't go along.

An initial response might be something like, 'come on ... not really.' I was thinking that very thing, at first. But then you find yourself stopping, thinking, then recalling your own first-hand experiences ... as I did when my own Christian denomination began considering divestment from companies that do business with Israel ... JUST as Chesler reported.

There are still among us survivors of those years when the noun 'holocaust' became forever capitalized. Chesler's "Living History" will leave you with the unsettling thought that still another Holocaust may be in the works.

I strongly recommend this book ... with ample time to read it closely, carefully, and to occasionally set the book aside and consider what you've just read.
__________

NOTE: I received a free e-copy of this work through LibraryThing in exchange for a review.
Posted by WestTexasMissioner at 7:05 AM