A moment of hope on Egypt's troubled streets ...

Even as the situation in Egypt took a turn for the worse, as crowds of pro-Mubarak supporters took to the streets, and there was a rise in violent clashes with protesters calling on the country's president to step down, there emerged a singular moment ... and a cause for hope - small, but there nonetheless - for that troubled country's future. 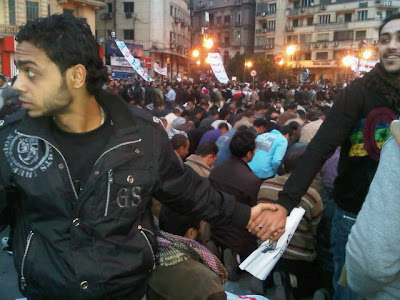 "A pic I took yesterday of Christians protecting Muslims during their prayers." Posted by @NevineZaki on Yfrog
Posted by Jeff at 12:05 PM