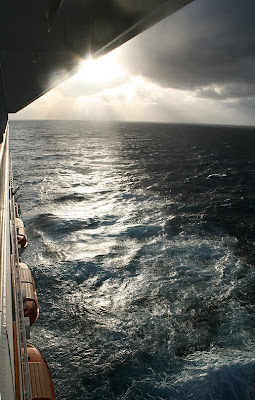 Maybe it’s the years I’ve now spent away from the coast, but a broad ocean vista has a tremendous appeal for me. Our ship will be entirely at sea today, en route from yesterday’s port to tomorrow’s. So from first light to last, there is nothing out there but the sea and the sky and the straight line dividing the two … and I’m enjoying every minute of it.

In some way, it is comfortingly familiar. My part of Texas is different from the rest - with a different look and a different ‘feel’ from those parts of the Lone Star State that make it into film or television It’s flat out in West Texas, and in parts of North Texas. They also have the winds, and those cause the mature grains to ripple, to create land-borne waves. Looking across this seascape right now, I can’t help but think … “add a couple of grain silos and a Dairy Queen, and I’d feel like I’m back in the Panhandle.”

Similar in some ways, and different in others. There are no grain silos, and no DQ anywhere to be seen. It takes the definition of ‘remote’ that one learns in West Texas, and takes it to a whole ‘nother level Occasionally another ship will pass nearby (this is a relatively well-traveled sea lane), but other than that we appear to be completely alone in this world defined by the limits of our vision.

And the winds. Again, we have them in West Texas … but there is nothing comforting about them, hot and dry and dust-filled as they can be. Here, the winds that blow across our deck are a cool, moist caress that refreshes me … though some old salts sharing our journey (including one who has sailed the Straits of Magellan) have told me just how punishing those caresses can be. My father, a thirty-year career Marine, would share similar stories of gales in the North Atlantic and typhoons in the South Pacific.

A sobering thought, really. I have experienced tornadoes in Texas, and I’m pretty sure I would NOT care to experience a severe storm at sea. Right here? Right now? No need to worry. During the summer, though? When hurricane season approaches? That’s a different matter, experienced cruisers tell me, and the reason cruise lines will divert some of their fleets to the northeastern U.S., and to Europe.

But here and now, it’s just me … ‘the old man and the sea’ … and the sky … and the breeze … and some colorful ‘rum-punchy’ kind of drink with a little paper umbrella.