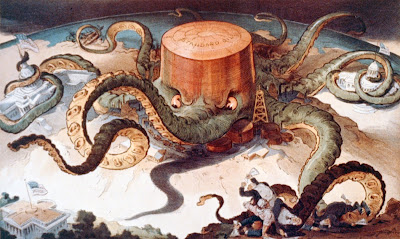 Where I part company with many of my fellow Patchers is in the reason for said image. I've been told over and over again that energy companies' bad image is SOLELY the result of ongoing efforts by Democrats in general, President Obama in particular ... liberals in general, and environmentalists in particular ... and don't forget BIG GOVERNMENT such as the EPA and OSHA.

Me? I'm willing to take all of the above into consideration ... BUT, I'm also ready to add another, significant contributors to that negative image ... the actions of a few companies, themselves. For example ...

"Transocean Ltd. gave its top executives bonuses for achieving the 'best year in safety performance in our company's history' — despite the explosion of its oil rig that killed 11 people, including nine of its own employees, and spilled 200 million gallons of oil into the Gulf of Mexico."
CLICK HERE to read the rest of the story from msnbc.com

At the risk of sounding all Dr. Phil-like ... "what were you you thinking?" I mean, what kind of year would this company have to have, where top officials wouldn't get bonuses for an exemplary safety year?