The final (?) curtain has gone down on perhaps the most dastardly character in West Texas television. It's time to say good night and good luck, goodbye and God bless to Darrell Ward. 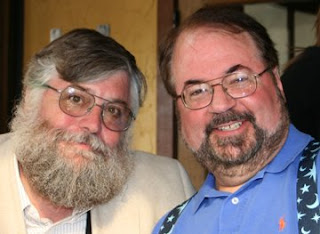 Darrell took his final bow Tuesday as NewsWest 9's morning weather anchor. He's a good man and a good friend, and I am sad to see his departure from the airwaves .....

But glad to learn that it is not a departure from West Texas. An experienced television weatherman, Darrell is also experienced in television ad sales, and he will be plying that craft for KPEJ-TV, the Fox affiliate for the Permian Basin. And that's good news for us all, because our community would be lessened by the loss of Darrell, Armenai and the boys.

He wasn't born in Texas, but he got here as fast as he could. Darrell grew up in Bartlesville, Oklahoma, in Tornado Alley in northeast Oklahoma. He can still remember standing on the front porch during severe weather in the spring; while everyone else was heading for shelter, Darrell would be watching the storms, going, "cool!"

He went to school at the University of Oklahoma (where he played clarinet in the college band) and shortly after graduation moved to West Texas. Darrell originally worked in radio in Lamesa for 13 months before moving to Midland/Odessa, which has been his home for over 30+ years now.

Darrell joined NewsWest 9 before it was NewsWest 9, in May of 1986, long before KTPX became KWES. I had been with KMID for about a year by then, and we were competitors for many years. Later, when John Foster took the reins as GM of KTPX, the station underwent some dramatic changes, and I had a chance to work WITH Darrell - which is a wonderful experience.

Weather and family are not Darrell's only interests. Another is theater - he remains, to this day, one of the great villains in Summer Mummer history. His experience in radio and theater, and his quick wit all contributed to one of the best deliveries in the the Basin. In fact, I'm wondering if the new job and the new hours will allow Darrell to return to the stage - that would be great!

Other passions - his faith, Harley Davidson motorcycles, and airplanes of all shapes and sizes. Darrell earned his private pilot's license some time back, and loves to fly in anything and everything with wings. He recently became a Colonel in the CAF, which has long benefited from his interest and his support. I still remember the blast we had once during Airsho, when we met General Robert L. Scott, Jr., USAF (ret.), World War II fighter ace and author of the 1943 book “God Is My Co-Pilot.” Over the years, Darrell was our go-to man for information about aircraft, history and how the two often came together.

... and so much more. New, young arrivals in the newsroom would find in him a remarkable archive of data on the history and geography of the region, the particulars of its weather, and the oil business that dominated its economy.

Darrell's a good man; NBC's loss is Fox's gain. Best wishes to him in his new role!

Eric, we are in complete agreement!

It's sad to see Mr. Ward go. I wonder what will happen to the ratings. I heard that KWES really stunk it up in May. If it's true, that would mean that out of the last 6 ratings periods KWES has only come out on top twice. Does anyone have the numbers for this ratings period?

Sorry, "good luck darrell" ... you and I must be sitting downstream from two different rumor mills. NewsWest 9 is determined to not go quietly into the night - if it's to go at all, which it may not. They've been doing a lot of things right lately.

However, I do share your wonder over what might happen to the ratings with Darrell's departure ..... and another that's coming soon.

I also share your sadness at seeing him go ... but like I said, he'll be staying here, in West Texas - and that's a good thing.

Here's a press release recently sent out by ICA Broadcasting. I verified the numbers and they check out. I watched tonight and compared coverage on the passing of Buddy West, there was a big difference. CBS 7 was far superior.

CBS7 KOSA-TV retains the honor of the most viewed television station in the Midland-Odessa market according to recently released ratings for May 2008 by the Nielsen Company.

CBS7 swept the other local broadcast stations in viewing households for all programming combined, and specifically for 10pm, Midday, Weekend News and Prime programming. In addition, CBS7 was first among all local stations in the key 25-54 demographic.

CBS7 News at Ten dominated the market with a 27 share of the audience. It’s the largest share of the viewing audience of all market newscasts. A share represents the percentage of audience tuned to a particular channel. KWES was second with a 20 share followed by KMID with a 3 share. CBS7’s weekend newscasts also posted large audience shares, retaining the number one position.

“We’ve assembled the finest team of journalists, led by Tatum Hubbard and Jay Hendricks, in the Midland-Odessa market and they’re backed by the latest news and weather technology. The ratings confirm the viewers have noticed the difference,” said General Manager Barry Marks. Viewer loyalty also helped propel CBS7 News at Six to the lead in the key demos. “The demographic share is significant because it’s important to our advertisers,” Marks said. “We extend our gratitude to our viewers for choosing our news product.”

The station’s most significant growth occurred in CBS7 Morning News with a 23 share compared to KWES’s 24. “Our morning news has consistently delivered the most current news and weather content, and viewers are increasingly choosing Krista Escamilla and Greg Morgan to provide them with the news and weather they need to start their day,” said News Director Jose Gaona. “We’re very grateful to our loyal Morning Show viewers for spreading the word about the quality of this news show,” he stated.

I hope you get to read this. You made mornings worth it. The moment I arrived in West Texas you were the first to remind me, "it's a dry heat!" Yes, it's dry, but gosh, it can be downright hot.

You taught me so much about television and communicating and connecting - particularly to the morning audience. I know I'm just one of many who got to share the desk with you in the past two decades, but it was my honor.

We traded spaces; now I'm stuck in your homeland chasing tornadoes with the sooners. I've certainly seen my share this spring.

God's blessings. Take care of yourself, and give my best to the family.

Jordan, thanks for stopping in! Always good to hear from you.

anonymous, having composed more than a few press releases on ratings performances over the years, I am able to read both what you have written, and what you have not.

Darrell is a great person! He placed the needs of his sons and family before his own and that is a wonderful quality. I think it is appauling that anyone would make use of his departure for commercial gain. This is not about who has better ratings it is about a man who has been a constant in weather over the past 22 years and will be missed, no matter who he worked for.

anonymous, VERY well said. Thanks for contributing, and getting us back on track.

Darrel is a good friend...and his Dad and mine were in the same battalion in WWII. Now that he's a Col. in the CAF he can go to work on my committee for the Air Sho!

I'm the GM at FOX West Texas and all I can say is HOORAY FOR US! I too have watched Mr. D. for many years now and I'm blessed today to have him on our team.... I consider it a miracle! We will take care of him, treat him right and together, we will do great things!
Laura Wolf
KPEJ TV

Laura, with Darrell's move, I now have still another friend at KPEJ. Good luck on your future ventures.

WOOOOOOOHOOOOOO Darrell!!!!!!! The boys and I are blessed to know you, Arminae, and your boys!!!!!!!

CONGRATULATIONS AND BEST WISHES for everything in store at KPEJ!!!!!!!

Be blessed,
Joelle and the boys

Joelle, thanks for stopping in, and for expressing sentiments that so many of us share.