It was not the kind of book cover that catches the eye and draws the browser in for a closer look, a perusal of the notes on the back of the dust cover, and a more thoughtful consideration of what to buy ... maybe it was the simple title - tastefully set in a simple font on a simple background - that caught my attention, then my hand, then my decision to make yet another purchase from the Friends of the Midland County Library ...
Dodsworth
by Sinclair Lewis
Modern Library
A small hardback, a 1944 Random House reprint of a novel from the man who gave us Babbit, Arrowsmith and Elmer Gantry, among others.
An acquaintance of mine from the University of New Mexico, Robert Fleming, once described Dodsworth as Lewis' most fully-developed novel, bearing his own unique style, but one that blended well with the contemporary topics popularized by Henry James, and the older roots of American literature planted by Ralph Waldo Emerson. 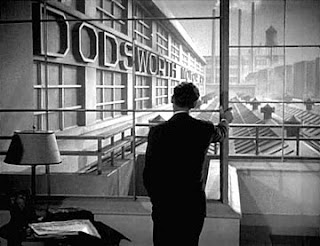 Yes, it is ... and it's also a darn good story, a critique of American culture and politics, values and desires, with its multitude of contradictions, presented to us in the lives of people we might encounter on any given day, on the 'Main Street' of our town. (photo is a still from a 1936 film adaptation of Lewis' novel)
On a Side Note ... late in the novel, Sam receives a letter from his estranged wife where, in her quest to become 'European' - she dismisses American life as thin, without tradition ...
"Sam laid down the letter and thought of the tradition of pioneers pushing to the westward, across the Alleghenies, through the forests of Kentucky and Tennessee, on to the bleeding plains of Kansas, on to Oregon and California, a religious procession, sleeping always in danger, never resting, and opening a new home for a hundred-million people."
Not a bad image, really ... one very much in keeping with the image I gained from my history books as a child ... are we still allowed to carry that image with us, and be proud of it, today? ... End of Side Note
For me, the purchase represented a chance to renew acquaintances I had made in high school, with Sam and Fran, Tub and Matey, Nande and - of course - Edith ... all in all, it was a pleasant and enriching experience, and I'm the better for it.
Posted by Jeff at 9:12 AM